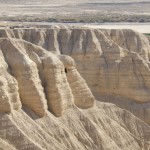 Discovered at the middle of the twentieth century, the Dead Sea Scrolls have revolutionized the study of the Hebrew Bible, ancient Judaism, and emerging Christianity. Of the Hebrew Bible, because they give for the first time access to manuscripts a thousand years older than the text known before; of ancient Judaism, because they testify to a religious plurality and an unsuspected literary activity; to emerging Christianity, because they offer striking parallels to major themes developed in the New Testament.

Sixty years after these manuscripts’ discovery, where are we in their decipherment? Do we at last know who wrote them? What conclusions can we draw from Qumran studies and their contribution to biblical sciences?

Qumran, the Dead Sea Scrolls Revealed in Burbach on November 3, 2016

Qumran, the Dead Sea Scrolls Revealed in Graffenstaden on March 22, 2016

Mysteries and Hidden Knowledge at Qumran: Dt 29:28 in Light of the Dead Sea Scrolls

One thought on “Qumran: Decryption and Biblical Enlightening”